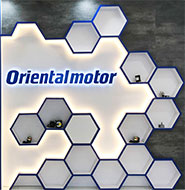 These torque motors conform to safety standards.
By providing an external voltage adjustment device, the speed and torque of the motor can be adjusted.
TM Series torque motor and power controller packages which include a power controller by which torque can be easily adjusted are also available.
Features
Product Line

Torque motors have large starting torque and sloping characteristics. The motor torque varies in proportion to the square of the applied voltage. For this reason, the speed changes when the load or applied voltage changes.

In an application where an object is released continuously at a constant speed and wound up with constant tension, the torque must be doubled and the speed must be halved if the diameter of the winding spool is doubled.
Torque motors have sloping characteristics that are near this relationship. For this reason, they can be used in a wide variety of winding applications.

Unlike induction motors or reversible motors, torque motors are designed to provide a stable torque in a locked rotor condition or near locked at low speed operation.
For this reason, they are suitable for pushing applications that require static torque, or for driving of loads that are under locked rotor conditions at the end of processes.

Use as a Brake

Torque motors can also generate a braking force when rotated in the opposite direction to the motor by an external force, etc.
The brake characteristics of torque motors are called "reversephase brake." The range indicated by the normal speed – torque characteristics is called the operating area, while the range where the motor functions as a reverse-phase brake is called the braking area.